A five-year time-out on war to provide a nutritious lunch every day for kids ? 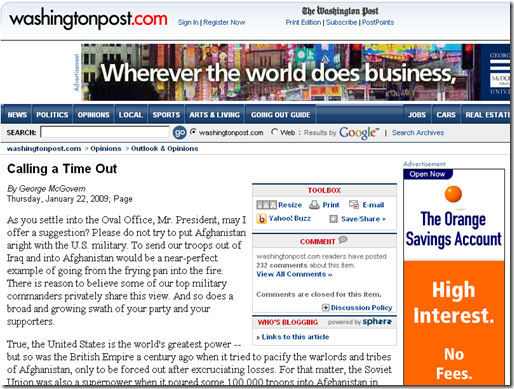 A very interesting article in today's Washington Post Outlook section by George McGovern, a former senator from South Dakota who was the Democratic nominee for president in 1972.

Read the full article here  and here are some highlights of George McGovern's :

To send our troops out of Iraq and into Afghanistan would be a near-perfect example of going from the frying pan into the fire.

"A truly audacious hope for your administration: How about a five-year time-out on war -- unless, of course, there is a genuine threat to the nation?

During that interval, we could work with the U.N. World Food Program, plus the overseas arms of the churches, synagogues, mosques and other volunteer agencies to provide a nutritious lunch every day for every school-age child in Afghanistan and other poor countries"

I kinda like the image of Blackwater USA mercenaries distributing food to kids. Then again, anytime they get in trouble in Iraq, they say they're merely transporting kitchen items around the country for our troops.