Stopping to watch the geese

Some days when i drop my son off i get to see some amazing scenery. And its just not the geese have a great weekend

Replies.
Posted by Shashi B at 9:28 AM No comments: 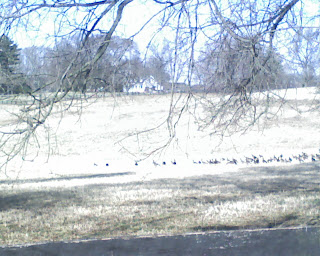 Some days when i drop my son off i get to see some amazing scenery. And its just not the geese have a great weekend
Posted by Shashi B at 9:18 AM No comments:

Demo of Utterz To Friends & Colleagues at Network Solutions 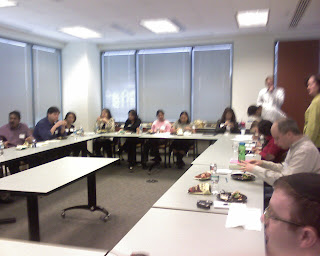 Talking to folks at network solutions
Posted by Shashi B at 12:04 PM 2 comments: 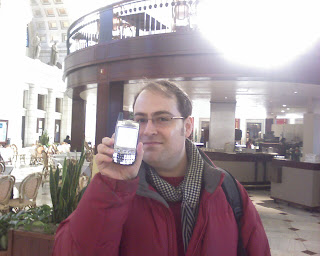 Andy carvin twitter is broken now ? Ghbrett is here
Posted by Shashi B at 8:06 AM No comments:

The multi-talented Jeff Hibbard - An example to emulate

Jeff Hibbard  is a gem. A gentleman in the social media ( doesn't imply others aren't :) ) I mean when he is around there is nothing but positiveness in his talk. He is very helpful and a very nice guy to  talk to. Passionate about social media.

here is a imaginary interview with Jeff Hibbard. Kindly note that there is not even a shred of truth in these answers and they are a figment of my imagination.

Q) Jeff why do you go around the beltway with a camera in your truck?

A: This is part of a grand plan that involves a multi-million dollar project. In future the traffic in the beltway will only worsen. I am now getting familiar with the mobile video blogging technology and the plan to montezie my technology is 2 fold :

Q) Is there any truth in the rumor that you are starting the first creative firm focusing on Online TV shows.

A:Yes, currently you will find us creating ads for Jonny's par-tay. Now Jonny is a talented guy. Once his show gets picked by the national network my ads will not be far behind. We will go from Jonnywood to Hollywood. Who knows where we can go next.


I told you this was imaginary but the truth is that every week for Jonny's par-tay Jeff creates an ad. They are very funny and are keepers. He works hard at his own business and then tries to engage in his passion - Social Media. I am really happy that he is my friend and it was great to meet him online and off line.

I got this email from the office of the Montgomery County Council member to whom i had written about saving Route 37.

I am delighted to announce that County Executive Leggett has revised his Ride-On Proposed 2008 Savings Plan, and he will no longer be canceling Bus Route 37 in Potomac.  It will run at a reduced frequency of 30 minute intervals, effective May 5, 2008.  For all the reasons that each of you communicated to me, I felt that it was very important that this route be retained, and I’m pleased that our County Executive heard our call and responded appropriately.

See my last post on the subject of Route 37.

I was on last week on Jonny's Par-tay and I am thrilled that Jonny is having Eric Litman, the Managing Director of WashingtonVC, as the  featured guest on the Par-tay on Wednesday Feb 27th. on JonnyGoldstein.com I got some free advice from Eric Litman when I met him a few weeks ago .

You should also check out the cool Google Map/Social Media Mashup that Jonny has on his site.

How to use utterz for Small Business and podcast

Have you done your taxes and figured out that you owe the IRS money? Do you not have the cash available for it? Are you trying to figure out how to pay it? Or has this happened to you in the past and you were somehow able to find a way to pay it? If so, would you be willing to talk to a Washington Post reporter about it? Please call Nancy Trejos at 202-334-6731 or email her at  trejosn [@ ]washpost(.)com if you are willing. (Must be a resident of D.C., Maryland or Virginia please.)

I had written a post here on the Montgomery County Maryland cutting down the bus route No 37 which among others served a school.

In the Washington Post outlook Section today Adam Garfinkle wrote a article on "the No. 37 Bus Uprising" . I learnt from this article that in order to mobilize the community a new blog was started http://rideon37.blogspot.com/
;The gazeete newspaper also carried an article "Bus riders beg to save Ride On routes" written by by Audrey Dutton
I hope the county listens to the community.
Posted by Shashi B at 1:59 PM No comments: 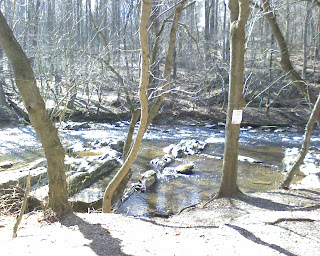 Sometimes i like to travel off the beaten track and today I discovered this scenery on the black rock road and could show to my son.

Cheers to nature
Posted by Shashi B at 10:53 AM No comments: 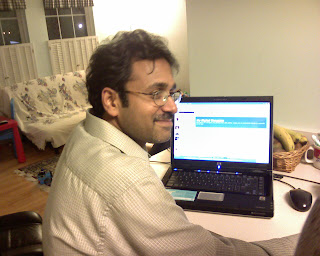 Friends over for dinner get a dose of social media
Posted by Shashi B at 10:35 PM No comments:

Live on jonnygoldstein.com at 9 p.m. 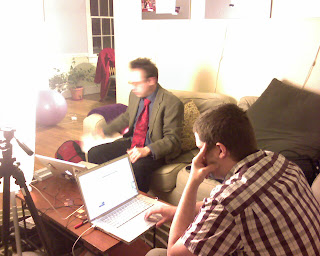 Preshow picture before the show
Posted by Shashi B at 8:38 PM No comments: 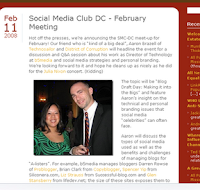 I will be going to the Social Media Club DC's February meeting where Aaron Brazell aka @techosailor will be presenting on the topic “Blog Draft Day: Making it Into the Bigs”

Want to Star in a mobile phone chick flick?

The blog announcement at http://overheatedsymphony.blogspot.com/ says :

Calling all women everywhere. Join the Birds Eye View Film Festival in the hottest international interactive mobilephone filmmaking project... Be a part of the OVERHEATED SYMPHONY: an innovative cinematic symphony of women’s voices from around the world.

We invite you to participate in a groundbreaking film project, by making a quick flick, between 40 seconds and 4 minutes long, on your mobile phone, on the theme: OVERHEATED.

I hope all my friends will enter and be the stars they truly are and have fun on the way .


How To Win A Cubical War
Watch more DIY videos on 5min.com
I got this link on Twitter from @jowyang Jeremiah Owyang. Its worth the 5 minutes. I have a few cubicle wars and they involved wrapping the whole cube, tin foil, changing the direction of the cube and of course the popular filling the cube with packing bits.
In this video the company is thanked for having a sense of humor but its not identified.
Pros:
I am sure there was enough supervision to make sure productivity was not affected.
The buddies shared he cost ( must be expensive)
Cons
probably  no fire code violation.
Now sometimes if the person gets offended then that stops all future pranks.
The question I have is :
Should the company have identified itself ? This is the kind of video that can spread virally. Would it help the company to identify itself ? Please comment and give me your opinion. Also look at the comments on the original video post and you will see some varying opinions
Posted by Shashi B at 7:52 PM No comments: 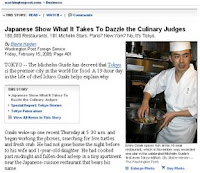 Japanese Show What It Takes To Dazzle the Culinary Judges
160,000 Restaurants. 191 Michelin Stars. Paris? New York? No, It's Tokyo.
Posted by Shashi B at 9:19 AM No comments:


Created with Admarket's flickrSLiDR.
Posted by Shashi B at 10:48 PM No comments: Blog Post from Acela on the way to New York

I am not a seasoned train traveler even though I love trains. I learnt my lesson a year ago when my 2 trips to New York by flight had resulted in a overnight stay due to canceled flights. In desperation I took Amtrak back to Washington DC. This trip I did not even attempt to book a flight.

I left my house at 4 a.m for the Union station. My train was at 6 a.m. Without traffic and a very clear George Washington Parkway I reached Union Station parking at 4.40 a.m. By the time I went down 3 levels it was 5 minutes. The ticket machine recognized my card and easily printed the tickets. Now people who know me know I am an adventurer but not a avid risk taker but still decided to see if I could catch the 5 a.m. I asked the smiling lady at the gate what it would take to catch the earlier train. She directed me to the ticket window. I was second in line and the gentleman said it wouldn't be a problem and that I had enough time to make it to the train. I paid the $21 dollars to change the reservation and boarded the train with at least 8 minutes to spare. They asked for my id there.

The first coach was First class. From the outside I could make out maybe 8 people there enjoying their juice. The next coach the conductor informed me was the "quiet coach" ( No cell phones and no loud talking) Nope that was not for me. I went to the next one and there it had about 6 people. The train left on time, didn't hear a announcement from inside the car. The conductor checked my ticket and made me sign the top left ( I did not get that. Why?) Then On the seat he put a card that indicated my destination ( Not sure this is a practice on any other railway).

As soon as the train got underway the conductor told us the cafe was open. I was hungry and was the first one there. The lady had a pleasant demeanor and gave me my egg and bagel and coffee. a few minutes after I had returned to my seat I saw her again as she brought me a fresh cup of coffee since as she said she had noticed after I left that my coffee had grounds in it. I am amazed that Amtrak has some great people - I am going to try and send an email about her great service.

I am on Twitter using my T-Mobile Dash as a Internet connection. The Dash is such a handy phone. Posting to a blog from a train is not new but this will be my first mobile post from a train. I am returning back this evening and hope to twitter and blog. On purpose I did not bring a book to read. Since its too early on the East Coast a lot of my US Twitter friends are still asleep I think.

Having passed Baltimore and Wilmington the train is still quite free. Oh! before I end this post I must tell you a year ago my co traveler was the CIO of Fannie Mae Rahul Merchant EVP and CIO of Fannie Mae. What a great guy ? it was the best 3 hours. He was very down to earth  now that is probably another post.

We just left Wilmington Delaware. The ride is not smooth (No I am not blaming any typos on the ride !) . When I go to India next I want to check the trains again to see if they have become smoother. The middle tier/ business class was always quieter and smoother from what I can remember.

Click to Play
Scott Stead took a nice video at the DC Social Media breakfast organized by Jeff Pulver. Jonny Goldstein helped with the registration. One unique feature was the "Social Tagging' You got small stickers which you could use to tag other people. Also on your name tag you had to put your tag line. Created with Admarket's flickrSLiDR.
A la @newmediajim I got to hang out with some exceptionally smart people. :) Thanks everyone specially Jeff Pulver and we will look forward to the next one in May.
Posted by Shashi B at 10:03 PM 1 comment: