Opportunities during a Hurricane : My story 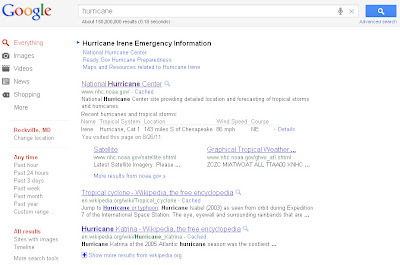 My first foray into online advertising was in 2003. Google had just introduced 'Adwords" and Hurricane Isabel was poised to strike. I got my Google Adwords account and seriously pondered what I would sell online. My only online marketing experience at that time was having Affiliate links to Barnes and Noble in 1999 and Amazon.
I did what every entrepreneur should do - be first to market and also take a risk. My first ad campaign had a  budget of $75 and used the keywords " Hurricane", " Hurricane Isabel" to advertise for all things the book "The Magic School Bus Inside A Hurricane by Joanna Cole ". These were the early days of Adwords and online advertising and the only competition I had for my ad was another ad that advertised a Carribean beach resort .

Business wise this was a poor decision on my part. During a Hurricane people are looking for information on disasters and maybe a ad selling emergence supplies may be a good idea but an ad selling books ( no matter how good) was a bad idea.

Learning wise that was the best $75 I could have spent for some real world online advertising experience. I was hooked. Instead of giving up I began to teach myself SEO and online advertising. Working on weekends and often late at night I built a great small business "shapra llc" and became a nights and weekend entrepreneur. The arrival of my second son and later the advent of Social Media prevented me from focusing on this business and the rest is history.

Hi there! Nice stuff, do keep me posted when you post again something like this! voice seo agency

fantastic points altogether, you just gained emblem reader. What could you suggest in regards to your post that you simply made some days ago? Any positive? Link Building Denmark

we are always looking for alternative or green energy because we want to stop polluting the environment.. digital marketing services