The economics of public transport do not make it worth your while and the public transport is not getting any faster either.Ten-cent Metro fare increase is effective February 28 through June 26 and the Metro press release says “Additional fare changes likely this summer”

Pune Blasts : Message to the world is to always remain alert

A few hours ago (Feb 13th 2010) a bomb went off popular cafe ‘German Bakery” in Pune India. At the time of posting this the press were reporting that 8 people had died and about 40 injured in this blast which left the bodies charred beyond recognition. The bakery is a popular spot with foreign tourists. The first information I got about 1.5 hours after the blast from one of my Twitter followers. At that time the incident had not even hit the mainstream media. I tipped of WTOP and they carried the news ( They may have got it from other sources)

WARNING: DO NOT ATTEMPT TO OPEN ANY INDENTIFIED BAG AND NOTIFY POLICE(applies anywhere in the world). According to initial someone tried to prise open a  unidentified bag at the German Bakery which may have triggered the blast.

Here are some observations:

Location of the German Bakery

Both India and Pakistan have nuclear devices and that makes any such terrorist attack very dangerous. After the Mumbai blasts India had agreed  to No hot pursuit on terrorists operating from Pak stating that the Israel policy in Gaza is very different from the Indian Sub - continent. How long will this patience last.The Telegraph reports  about this

Britain and the United States played key roles in dissuading India from launching a retaliatory attack on Pakistan following the Mumbai attack in 2008 after it emerged that the fidayeen commando raids on the country's commercial and film capital had been orchestrated from Karachi.

Last month the United States Defence Secretrary, Robert Gates, said India had shown great restraint but he feared another terror attack launched from Pakistan could provoke a new war between the nuclear neighbours.

"I think it is not unreasonable to assume Indian patience would be limited were there to be further attacks," he said during a visit to New Delhi.

The Hindu a national newspaper reported that a terrorist group in Pakistan had warned of attacks on Pune Feb 5th.

One week before a bomb went off in Pune’s German Bakery, the Jamaat-ud-Dawa in Pakistan had warned of the city being a potential target.

Addressing a rally in the Pakistani capital on February 5, Abdur Rehman Makki, deputy to JuD leader Hafiz Saeed said that at one time, jihadis were interested only in the liberation of Kashmir but the water issue had ensured that “Delhi, Pune and Kanpur” were all fair targets.

His remarks were reported by The Hindu’s Islamabad correspondent and published in this newspaper the next day. The JuD is the new name of the Lashkar-e-Taiba, which is a banned organization in Pakistan.

The Washington Post has a Quote from Rabbi Betzalel Kupchik of Chabad :

"We could hear the blast. Thank God we are fine," Rabbi Betzalel Kupchik of Chabad said in a telephone interview, adding that a small group of people at the center felt the explosion just after gathering for prayer to mark the end of the Sabbath. " We will continue our work here. We can't back down."

An unrelated event is the new Shah Rukh Khan movie “ My name is Khan” was released yesterday  Feb 12 2010 In India and all over the world. It caused a controversy in Mumbai with police needing to offer protection to theatres screening the show. The controversy stated with  the Indian Professional League (cricket) being  accused of ignoring the 11 Pakistani cricket players who were available in the auction for sale. The franchises said Pakistani players' availability was not certain and they couldn't risk their money on them. Shah Rukh Khan, was quoted as saying that Pakistani players should be included in India's Twenty20 cricket league. Shah Rukh Khan owns one of the IPL teams Kolkata Knight Riders

The love for your kids can turn you into a artist Proud of my coloring sketches, originally uploaded by ShashiBellamkonda.
Posted by Shashi B at 9:55 PM No comments: 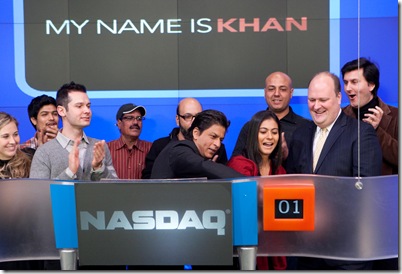 To celebrate the release of the film “My Name is Khan” the stars of the movie Kajol and Shah Rukh Khan rang the NASDAQ Opening Bell this morning (Feb 1. 2010) in New York. The film “My Name is Khan” opens worldwide on February 12 being released by Fox Searchlight (Fox is owned by News. Corp., which also owns and publishes The Wall Street Journal).

Bollywood is now exporting movies worldwide and in several theatres across the US. See the Film’s page at Fox Searchlight or the movie’s blog at http://www.mynameiskhan.org/


My Name Is Khan
by moviestune
Posted by Shashi B at 8:19 PM 1 comment: