CEOs Don’t Have to be 6 Foot Tall. James Madison Shows Us How


Feeling proud of this fact about James Madison, you look at what Malcolm Gladwell says in his book Blink “ I found that on average CEOs were just a shade under six feet. Given that the average American male is 5’9″ that means that CEOs, as a group, have about three inches on the rest of their sex. But this statistic actually understates matters. In the U.S. population, about 14.5 percent of all men are six feet or over.”
I am still going to take inspiration from James Madison and then I see this article in INC magazine by JOHN WARRILLOW Founder, The Value Builder System
John accepts that he is short but ends the article with “If you’re short, fear not. While you may have an uphill battle for the corner office of a big company, you’re the perfect height to start your own.”
Ok I am confused, USA was built with the force of persuasion and influence of James Madison who according to David was not taller than 5ft 6 but in today’s world leaders have to be tall and if not they should seek to setup their business if they are short. Does this make sense? 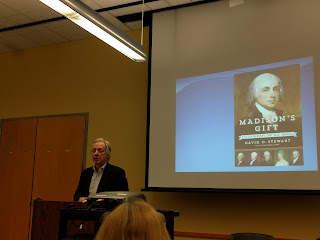 Then +RACHEL FEINTZEIG says in a Wall Street Journal article “Aiming for a job in the C-suite? Height helps, according to a new study.”
It is not helpful that USA Today says “ CEOs say being bald doesn’t impede success and, given a choice, it’s better to be bald than short.”
The Economist continues to convince everyone by saying “ The typical chief executive is more than six feet tall, has a deep voice, a good posture, a touch of grey in his thick, lustrous hair and, for his age, a fit body. Bosses spread themselves out behind their large desks. They stand tall when talking to subordinates.”
What’s the point of this post? It seems that the tall folks have a better chance of being CEO’s but them if you are short , don’t despair. Take heart from James Madison and even go and read David.O Stewart’s book. David says James Madison succeeded by bringing people together and partnering with them. Hope to see you in the CEO’s office soon.
How tall are you or your company’s CEO?
Posted by Shashi B at 7:42 AM 8 comments: