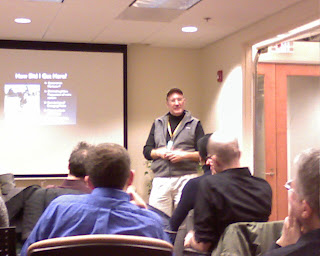 This was the first meeting of the DC Social Media Club that I attended. The consistent theme of all the social media events I attend is that the speakers are knowledgeable but humble. Feedback, questions, clarifications are expected. Then the lecture takes on the form of a really show as the speaker explains a tool and then someone in the audience actually uses it. This happened during the Social Media Club Dc meeting today when newmediajim mentioned Utterz and Johnny Godstein took out his phone and "uttered" immediately.

NewmediaJim talked about how he evolved into the Social Media Space. What were the highlights. Advice on Social Media Dos and Don'ts. I want to get hold of his presentation - it was very good. Twitter should use him as their evangelist.

- Do not linkspam especially bots that send out only links
- Do other people want to know abt you and your kids. This lead to a interesting discusssion and Technocailor joined in. Since Twitter is more about transparency and knowing you as a person more than the company or cause you represent - people who follow you may like to just know who you are as a offline person
- Have a offline life too ( Don't become addicted)
- Do not Twittr while driving
- Choose to follow people who interest you with their posts. NewmediaJim recommends ConnieReese, Chrisbrogan.
- Related stories of visit to Singapore and Afghanistan and Iraq


Livestream was courtesy of iStrategyLabs

Jill M Foster of the DC web Women - Twitter as jillfoster
Rana Shobhaney ; Did you know this side of her ?

Technosailor decided to avoid traffic so he came earlier. Very wolrdly wise. He is a great guy ti meet so full of energy. He is a certified great guy


Did Marc Benton beat NewmediaJim in the number of followers?

Dude! to get the answer read his blog
GerryT Sets a new record

Even before newmediaJim started his session in typical grassroots style GerryT asked his first question. Did you know he holds the distinction for following many people on one day n tiwtter and being shutdown. To me its like my ISP shuttignng me down because spammers are sending spam to me ( maybe not :) )

Check out the GerryT Show

Michael Smith (Teratech.com) came to the meeting. he doesn't Twitter but he manages the Cold Fusion User group in Maryland. it was great to meet him.

Randolph Adair will be starting afresh on Twitter and needs info on how realtors can make use of Social media.

Larissa Fair was runnning the show and as acive as ever. I wish I had more time to chat.


I met a ton of other folks - Jared Goralnick I think I was sitting with @barn and @kyinc, Viget labs and Joe loong. I Missed meeting a couple of other people from this evening. if you dont find a mention here please let me know and I will set that right.
Posted by Shashi B at 7:12 PM